John Millman was no match for a rampaging Rafael Nadal on Monday at Wimbledon while qualifier Andrew Whittington's fairytale run came to an end. 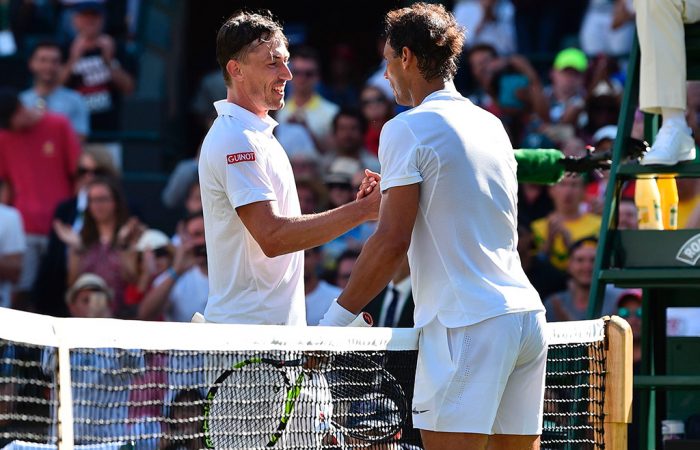 After missing last year’s edition with a career-threatening wrist injury, Nadal brutally brushed aside Millman 6-1 6-3 6-2 on Monday to swiftly showcase his credentials for a third crown at The All England Club.

Nadal, the world No.2, fourth seed and newly-crowned 10-time French Open champion, next faces American Donald Young on Wednesday for a place in the third round.

Millman had pushed two-time Roland Garros semifinalist Dominic Thiem to five sets at last year’s US Open, but never looked like becoming the fifth straight player ranked outside the top 100 to send Nadal packing from Wimbledon.

Celebrating his 50th match at the spiritual home of tennis, Nadal broke the Queenslander’s serve three times in the opening set and then again early in the second when the best rally of the match ended with the fourth seed whipping a winning forehand down the line.

Millman offered some resistance by breaking back for 3-2 but Nadal would not be deterred as another booming forehand left his opponent sprawled on the floor, face-planted into the turf.

Nadal was handed a time violation at the start of the third but nothing could delay his progress as three more scintillating forehands in the final game rounded off an emphatic performance.

“He’s a class act, he’s a champion and, yeah, he abused me out there,” Millman said.

“I absolutely can’t imagine playing him on clay. I reckon if the French Open was tomorrow and I drew him first round after playing him just then, I’d be probably a be a little bit intimidated.”

Meanwhile, Whittington, ranked No.210 in the world, had already banked $A59,000 for his breakthrough Grand Slam performance and looked well on course for another decent pay day after taking the first set on Court 16.

However, Monteiro battled back well following a medical time-out for a back issue to take the next two sets.

An early break in the fourth set for Whittington put the 23-year-old 4-2 ahead, only for Monteiro to reel off the next three games and take the lead.

Whittington saved three match points on serve on the way to taking the set to a tiebreak only for the Brazilian to close out victory in just over three hours following a 30-minute rain delay.

“I am shattered to lose that. I really wanted to keep the dream alive and feel like I missed a great chance,” Whittington told AAP.

“I guess my run had to come to an end today. I got out of trouble three times in quallies, and tried my best again but it wasn’t meant to be.

Despite the loss, Whittington said he’d received a massive confidence boost and is determined to play in his third grand slam this year by qualifying for the US Open in August.

“It’s been something that I needed, keeping the confidence up and hopefully I can keep winning and get back here again next year,” he said.

“I’ll play in the doubles here, then head over to the States to play a grass comp at Newport and then try and qualify again for the US Open.”