Tennis Australia’s Wellbeing Program is being rolled out across the country in the coming weeks. 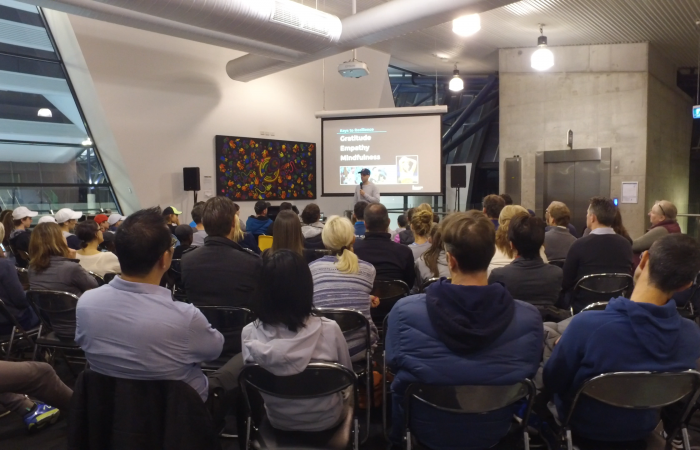 The emotional health of its young athletes is at the forefront of Tennis Australia’s Wellbeing Program, which will be rolled out across the country in the coming weeks.

The program, which has just been launched in NSW and Victoria and is expanding across Australia, aims to produce tennis players who embrace the sport’s opportunities and thrive on its challenges – both on and off the court.

The five pillars of the program are ‘learning’, ‘physical activity’, ‘connection’, ‘mindfulness’ and ‘giving’, with each player individually monitored to ensure that they maintain a healthy wellbeing range.

Program activities include Sports Psychology Performance and Nutrition Education workshops, charity work, cross code sessions and school visits. The first activity planned for later this month is ‘Mates Day’, where players are encouraged to bring a friend along to their training sessions.

The keynote speaker at last week’s Victorian launch, held at the National Tennis Centre in Melbourne Park, was Hugh van Cuylenberg, the Founding Director of the ‘Resilience Project’. His program has been embraced by the NRL, Cricket Australia, Netball Australia and several AFL clubs, including Richmond, Hawthorn and Collingwood.

Van Cuylenburg was followed by Tennis Australia’s Athlete Education Manager Natalie Martin, who outlined the delivery of the numerous services and activities within the program in her role as Victoria’s ‘Wellbeing Ambassador’. Each state will appoint an ambassador who acts as the chief point of contact for any wellbeing concerns amongst players, coaches or academy staff.

“We want emotionally healthy and happy tennis players, who love competing but who also thrive on life’s many challenges,” she said.

“We want our kids to lead balanced lives, which means pursuing other interests outside tennis. Probably the most important pillar is connection, because it’s crucial that the players remain connected to friends and family when they leave the tennis centre.

“There’s been a lot of discussion recently in the media about the difficulties elite athletes face in transitioning back to a non-sporting environment, so we’re hoping to lay some really solid wellbeing foundations through this program to enable our players to deal with the daily challenges they face on and off the court.”

“The old adage that it takes a village to raise a child is alive and well at Tennis Australia,” said National Performance Wellbeing Manager, Ben Robertson.

“By incorporating the Wellbeing Program into the young athletes’ schedules, we are not only enhancing their performances but more importantly developing them as people. Our mission within the Performance team is to produce and support well-rounded players, and to do this we need to create an environment and culture that promotes development both on and off the tennis court.

“The Wellbeing Program and the life skills within it will complement the tremendous work that is already being performed by our coaches and staff.”

“We teach people to practice gratitude, empathy and mindfulness, the last of which is particularly relevant to elite athletes. I’ve been working with Tennis Australia for around three months now, and the simple formula is that if the players are happier off the court, they’re going to perform better on the court.”