Sam Stosur and Bernard Tomic are searching for form on clay ahead of the French Open after falling in the opening round of the Internazionali BNL d'Italia in Rome. 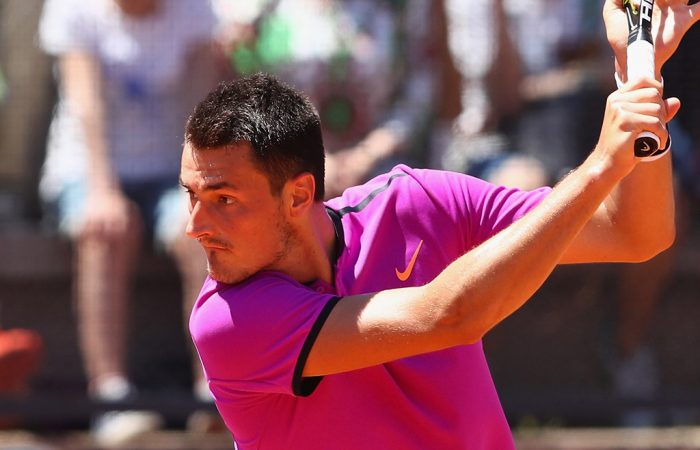 Sam Stosur has been sent out in the opening round of the Rome WTA tournament, losing to Anastasia Pavlyuchenkova.

Earlier on Monday, Bernard Tomic faltered after a strong start to lose in the first round of the men’s event in the Italian capital.

It is the second time in three years that Stosur has fallen to the Russian at this stage in Rome.

The big-hitting Pavlyuchenkova defeated Stosur 6-4 6-7(5) 6-1 in a see-sawing battle that lasted over two-and-a-half hours.

The loss is a blow to Stosur who would have been hoping for more court time in the lead-up to the French Open in Paris, in just under two weeks.

At the end of the second set, Stosur had all the momentum after reeling off the last three points of the tiebreak with some big forehand winners.

Pavyluchenkova looked despondent at the end of the set but she held serve early, then immediately broke Stosur with a fine display of power-hitting before rolling through the final set.

Tomic, who fell in the first round in Madrid last week after a quarterfinal showing on clay in Istanbul, went down to Jan-Lennard Struff of Germany 6-7(8) 6-1 6-4.

After winning a tight first set and having break opportunities on Struff’s serve in the first two games of the second set things began to unravel for the world No.40.

Struff rattled off five straight games to take the set and momentum into the decider.

Things were evenly poised until the ninth game when Struff broke Tomic before serving out the match.

Tomic has typically struggled on clay and at best now can enter a few minor tournaments before the start of the French Open at the end of the month.

Novak Djokovic and Andy Murray headline...
"It has been a long time since...

Tstisipas: 'I Plan To Push Boundaries'

Dominant Dutch See Off Slovakia To Advance In Davis Cup