Sam Stosur is ready for a French Open third round showdown with Bethanie Mattek-Sands. 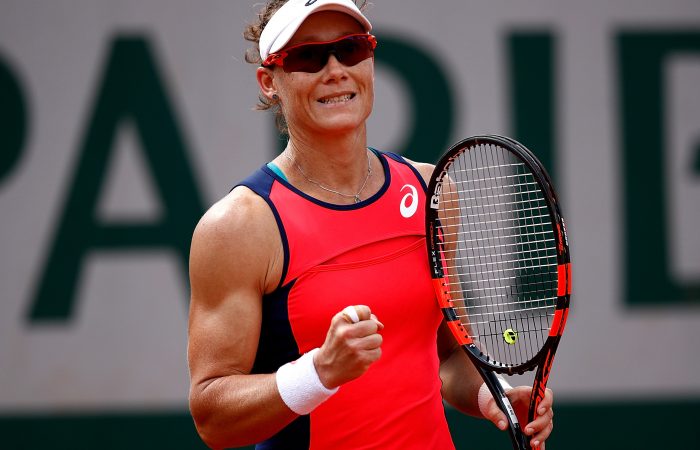 Sam Stosur is drawing on a decade of happy Paris vibes as inspiration for yet another French Open title charge.

Former champion Svetlana Kuznetsova and one-time finalist Venus Williams are the only players left in the wide open women’s singles draw boasting more wins than Stosur at Roland Garros after Australia’s perennial contender charged into the third round for the ninth straight year.

While refusing to look beyond her match tonight against American qualifier Bethanie Mattek-Sands, Stosur – a four-time semifinalist and 2010 runner-up – admits her excellent record at the claycourt showpiece continues to drive her bid for an elusive second Grand Slam crown.

“It’s nice to come back every single year. I guess you do have certain memories,” the 33-year-old said.

“While you’re playing it’s certainly not anywhere near the forefront of my mind or anything like that, but I really enjoy obviously playing here.

“It’s a surface that I like to play on. These are some of the best clay courts in the world. I feel like if I’m really out there and playing my good tennis, then I can do very well.

“It’s a matter of trying to do that every single day against every opponent, which isn’t easy. But I’m really enjoying it here so far this year.”

With a 36-13 win-loss record at Roland Garros, Stosur says matches are decided on her racquet more at the claycourt Slam than anywhere else in the world.

“With my weapons, I can use them maybe a bit more easily on this surface,” the 2011 US Open champion said.

“I don’t know, maybe I just feel a bit more confident this time of year or something.

“But, at the end of the day, I know you’ve still got to bring it every single time.”

And Stosur knows full well that she must “bring it” against Mattek-Sands, a fearless competitor with a taste for the big stage.

A six-time grand slam doubles champion and 2016 Olympic gold medallist, Mattek-Sands showed there was no room for sentiment in ending Petra Kvitova’s emotional comeback in the second round.

Her elimination of the dual Wimbledon champion, following the shock first-round exit of world No.1 Angelique Kerber, has blown Stosur’s quarter of the draw wide open.

But the only opportunity Stosur is eyeing is the chance to topple Mattek-Sands to reach the second week in Paris for a sixth time.

“She’s obviously one of the best doubles players in the world. She’s going to want to try and be aggressive,” Stosur said.

“We have played each other a few times in our careers but not for a while.

“I know she always tries to be on the front foot, be aggressive, probably move forward a bit, try to make a lot of plays herself.

“I’m going to have to try and be aggressive, play my game, but be aware it’s going to be a little bit different at times, and, yeah, be focused on trying to adapt as I need to.”

The winner will play either Latvian Jelena Ostapenko or Ukraine’s Lesia Tsurenko in the fourth round.

Rodionova is also scheduled to play a first round mixed doubles match.