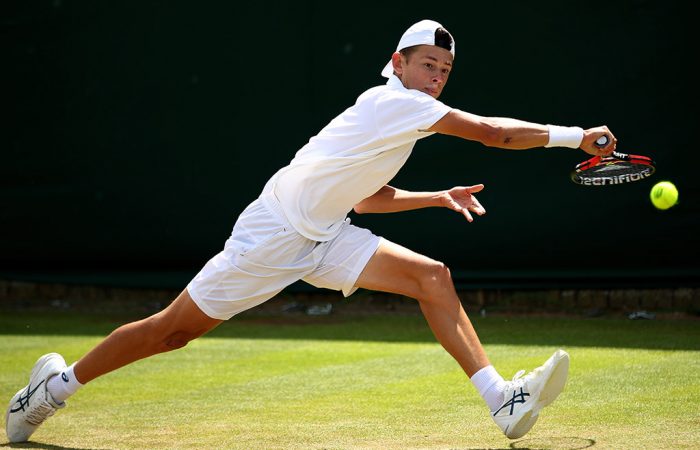 Alex De Minaur has continued his impressive transition to the professional ranks with a come-from-behind victory against Jurgen Melzer in Wimbledon qualifying.

On the adjacent court, another Aussie, Andrew Whittington, stormed from 1-4 down in the third set to beat French veteran Stephane Robert 3-6 7-5 6-4.

Less than 12 months ago De Minaur – who next faces Japan’s Tatsuma Ito – was in the final of the Wimbledon junior singles, where he fell in three sets to Denis Shapovalov.

A year on, and with some impressive results under his belt, the Spain-based Sydneysider said he felt he belonged at the level of his more experienced opponents.

“I think (the Wimbledon juniors) was a big stepping stone. And since then that result helped me gain some confidence and belief in myself a bit more,” said De Minaur, who earlier this year came through qualifying at the Brisbane International and then won his opening round match in five sets at the Australian Open.

“I’ve just tried to keep a high level throughout the whole year and I’ve been lucky to have some pretty good wins. At the end of the day you’ve just gotta be there week in and week out and try to maintain your level the whole year.

“I know that I’ve got the level – it’s just about rocking up that day and producing that level. I do really enjoy playing on grass. I think it suits my game.”

Early on, however, it was Melzer who was loving the surface. The Austrian, who reached the second week at Wimbledon in 2011 and 2013, was relentless in the opening set before the young Aussie settled and began to gain more and more break point opportunities.

On his sixth of the second set, De Minaur finally converted and in the third appeared fitter and faster than Melzer, who required a medical timeout to treat his left forearm (which was already strapped).

“That first set I really just got hit off the court, He was playing too good – hitting winners off everything,” De Minaur said.

“I just tried to keep a calm head and I was telling myself I was going to get opportunities to break him and I just had to keep trying to hold my serve.

“I felt as soon as I got that break (in the second) there was a real shift in momentum. I just tried to be constant and very intense the whole match. Just trying to show him I’m going to be there for every single point.

Whittington, meanwhile, was just two points from defeat in the 10th game of the second set. Yet he aced his way out of trouble to hold for 5-5 and played patient grasscourt tennis, keeping his backhand slices low before creating chances to attack.

He broke for 6-5 and soon levelled the match, but promptly fell behind 3-0 in the third as the Frenchman resumed control.

Whittington faced three break points – which would have given Robert a 5-1 lead – but staved them off, and began to reel in the 37-year-old in.

He forced an error from the Frenchman to seal victory in just over two hours, a result capped by 18 aces.

Earlier on Monday, Blake Mott and John-Patrick Smith also advanced to the second round of qualifying.

Smith led 6-2 5-3 before Djere got back into the match to force a third set, yet the Queenslander steadied to set up a second-round meeting with American Mackenzie McDonald.

In the late afternoon, Sam Groth went down in a heart-breaker to Simone Bolelli, double faulting on match point to fall 7-6(3) 2-6 11-9.

A few games earlier, Groth had saved a match point with a splendid reflex volley and a couple of points later held for 7-7.

Yet with Bolelli serving first the Australian was always playing catch-up, and ultimately it was Bolelli who was more secure on the return and from the baseline.

Another Aussie, Marc Polmans, went down 6-4 7-5 to Stefan Kozlov.