ATPTour.com’s annual season-in-review series looks back at 2022’s best matches, biggest upsets, most dramatic comebacks and more. Today we reflect on five of the most memorable Grand Slam battles of the year, featuring World No. 1 and US Open winner Carlos Alcaraz, and Australian Open and Roland Garros champion Rafael Nadal.

5. Roland Garros, QF, Cilic d. Rublev 5-7, 6-3, 6-4, 3-6, 7-6(10-2)
As two of the most fearsome forehands on Tour clashed at the beginning of June on the Roland Garros clay, an extraordinary sequence of clean hitting from Marin Cilic in the deciding-set tie-break clinched a thrilling quarter-final against Andrey Rublev.

Cilic came into the match in a confident mood — he had described his fourth-round triumph in Paris against World No. 2 Daniil Medvedev as “one of the best matches of my career from start to finish” — and the Croatian’s confidence was clearly demonstrated in the way he took the deciding tie-break out of Rublev’s hands at the tail-end of an almighty tussle with a sequence of searing winners. 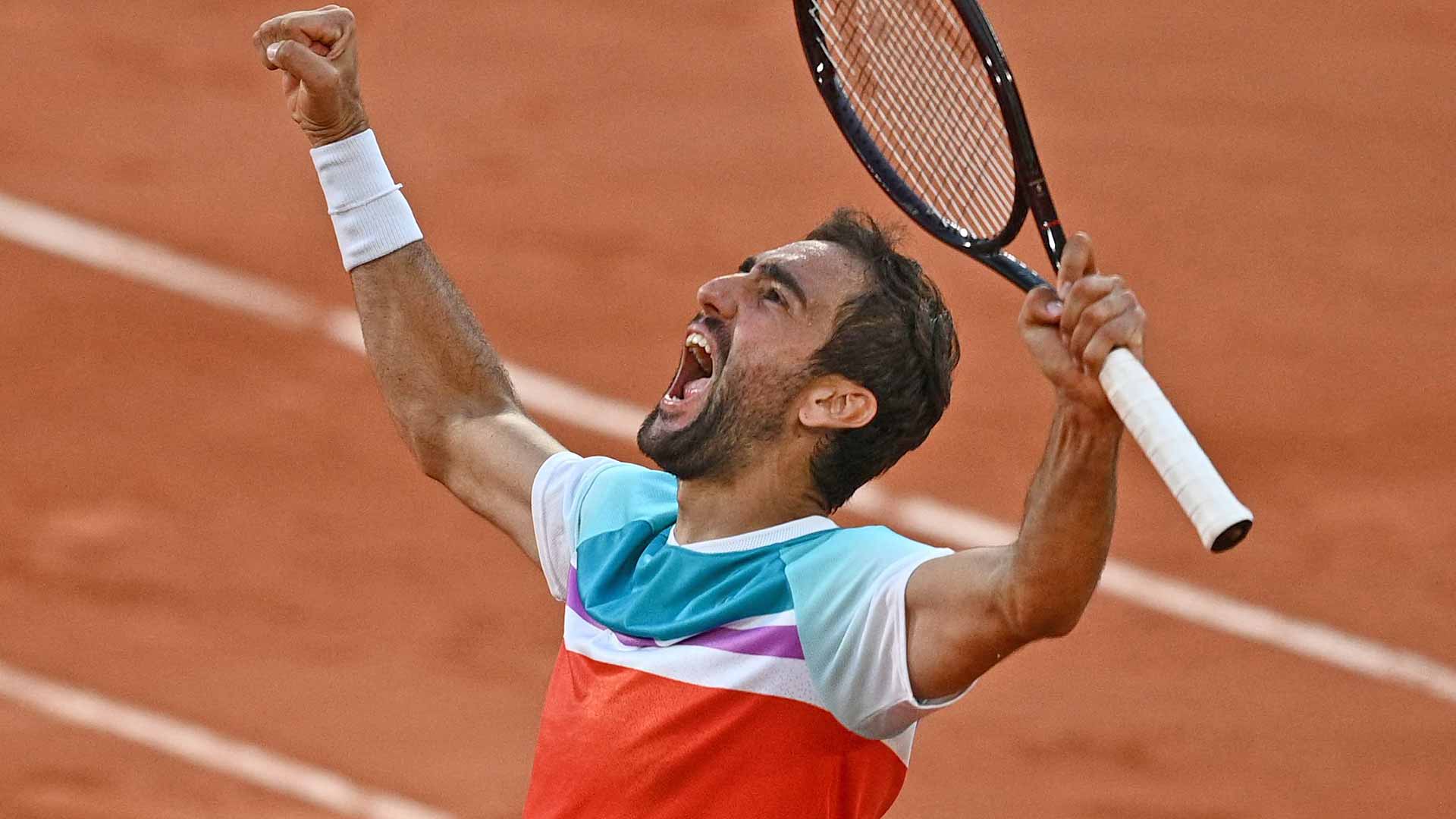 “It comes from being me," said Cilic when asked about his aggressive approach to the tie-break, in which he won nine straight points from 1/2. "I played that kind of tennis the whole match, and especially the fifth set was an incredible battle… A lot of heart, and one had to go down. Today was my day, but Andrey also played an incredible match.”

Cilic had to dig deep after a fast start from Rublev on Court Philippe Chatrier, where the Croatian opted to meet the seventh seed’s forceful groundstrokes with plenty of power-hitting of his own. He finished the match having struck a remarkable 88 winners, including 33 aces, in an epic four-hour, 10-minute triumph.

The win made 33-year-old Cilic the fifth then-active player to reach the semi-finals of all four Grand Slams, alongside Roger Federer (now retired), Rafael Nadal, Novak Djokovic and Andy Murray.

4. Roland Garros, SF, Nadal d. Zverev 7-6(8), 6-6 (RET)
It may seem unusual to declare a match that potentially wasn’t even halfway done when halted by injury as one of the best of the season, but such was the quality of tennis that Rafael Nadal and Alexander Zverev produced in their Roland Garros semi-final clash that it remains a must inclusion.

There was a steely determination to those pre-match comments from the German. Just two victories from claiming a maiden Grand Slam crown which would also have lifted him to No. 1 in the Pepperstone ATP Rankings for the first time, he seemed set on taking the match to the Spaniard.

For the best part of two sets, Zverev did just that, as his fearless approach played a major role in some of the most scintillating Grand Slam tennis of the year. The World No. 3 went toe-to-toe with Nadal from the baseline early on, before the Spaniard showcased his resilience by rallying from 2/6 in the first-set tie-break to claim an epic one-hour, 31-minute opener.

Despite that disappointment, Zverev’s determination to stay on the front foot helped him open a 5-3 lead in the second set. After Nadal had again rallied to reclaim the break and take an absorbing encounter to the brink of a second-set tie-break, however, a match already set to become a bona fide classic was cruelly cut short. 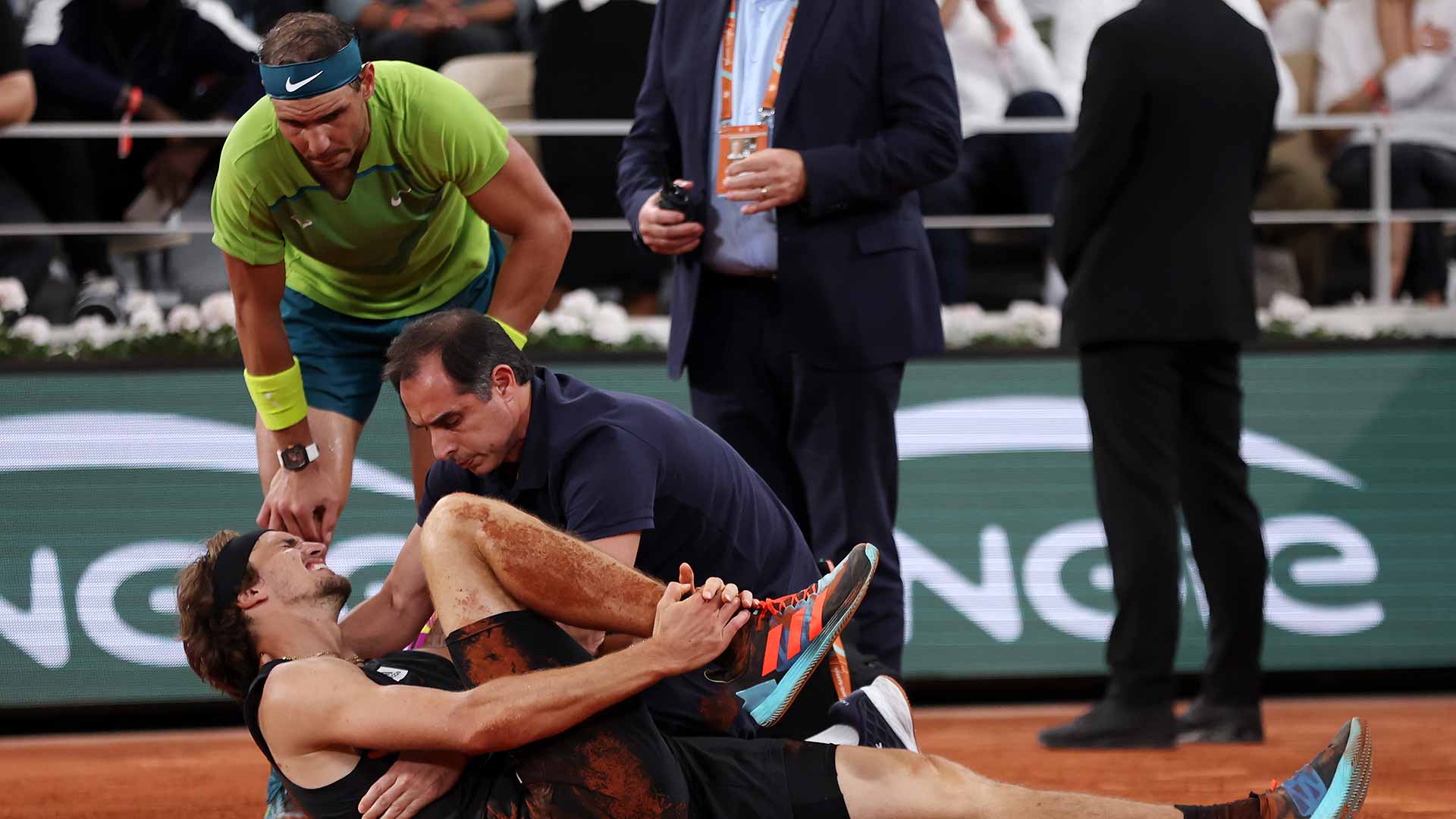 Chasing a Nadal forehand out wide to his right on the final point of the 12th game, Zverev badly rolled his right ankle. The ligament damage he suffered immediately put a painful end to both his Roland Garros campaign and his bid to become World No. 1, as well as bringing to a halt one of the best matches of the season after a breathtaking three hours and 13 minutes on Court Philippe Chatrier.

"Very tough and very sad for him," Nadal said after the match. "Honestly, he was playing an unbelievable tournament. He's a very good colleague on the Tour. I know how much he's fighting to win a Grand Slam, but for the moment he was very unlucky. The only thing I'm sure is that he is going to win not one — more than one."

3. Australian Open, Third Round, Berrettini d. Alcaraz 6-2, 7-6(3), 4-6, 2-6, 7-6(10-5)
There were some early signs of what was to come from Carlos Alcaraz in 2022 in this third-round epic at January’s Australian Open, but a fired-up Matteo Berrettini prevailed over the Spaniard across a topsy-turvy five sets in the Melbourne heat.

The seventh-seeded Italian appeared in control after surging to a two-sets-to-love lead on Rod Laver Arena, before the 18-year-old Alcaraz roared back to force a deciding-set tie-break. Having rolled his ankle in the second game of the fifth set, it was to Berrettini’s credit that he held firm to clinch a four-hour, 10-minute battle.

"I felt confident, and that momentum was on my side in the third set but then I got broken,” said the Italian afterwards. “My energy wasn't right in the fourth set and in the fifth I just started to think about fighting for every point. In every match something happens [like the ankle injury] but I fought through it." 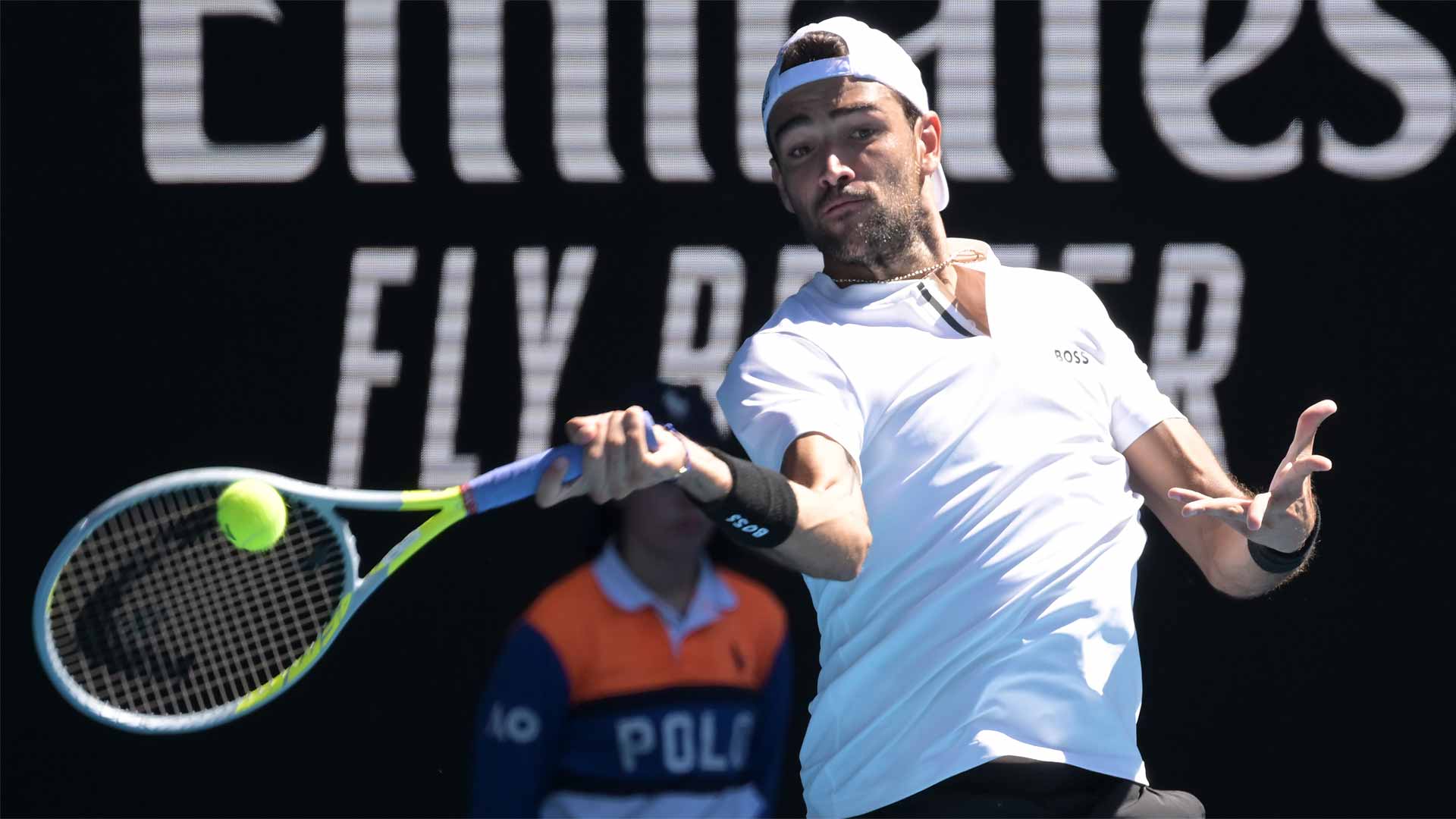 Alcaraz saved a match point at 5-6, 30/40 in the fifth set to take the pair’s first Grand Slam encounter to a deciding tie-break. Although a series of missed forehands subsequently cost the then-World No. 31 a statement victory, Berrettini was full of praise for his young opponent.

"At his age I didn't have an ATP point and he will only improve," said the Italian. "He showed everyone his potential today.”

"I'm very proud of the performance today," reflected Alcaraz. "It was my first time two sets down and then to be able to come back the way I did... I gave everything on the court."

2. Australian Open, Final, Nadal d. Medvedev 2-6, 6-7(5), 6-4, 6-4, 7-5
At two sets-to-love-down and trailing 2-3, 0/40 on his own serve, Rafael Nadal’s hopes for a record-breaking 21st Grand Slam title at January’s Australian Open appeared lost. Daniil Medvedev’s red-hot start to the championship match in Melbourne had left the Spaniard struggling to keep up.

Cue what Nadal later described as “probably the biggest comeback of my tennis career”, as the 35-year-old roared to a stunning five-set victory to become the first male player to win 21 major crowns. Nadal began to out-hit Medvedev, one of the most powerful ballstrikers in the game, as he broke the second seed five times across the third, fourth and fifth sets on Rod Laver Arena.

“At the end history is about the victory, but the way that you win the match in terms of personal feelings is different,” Nadal said after the five-hour, 24-minute epic. “The way that I achieved this trophy tonight was just unforgettable, one of the most emotional matches of my tennis career, without a doubt. [It] means a lot to me.” 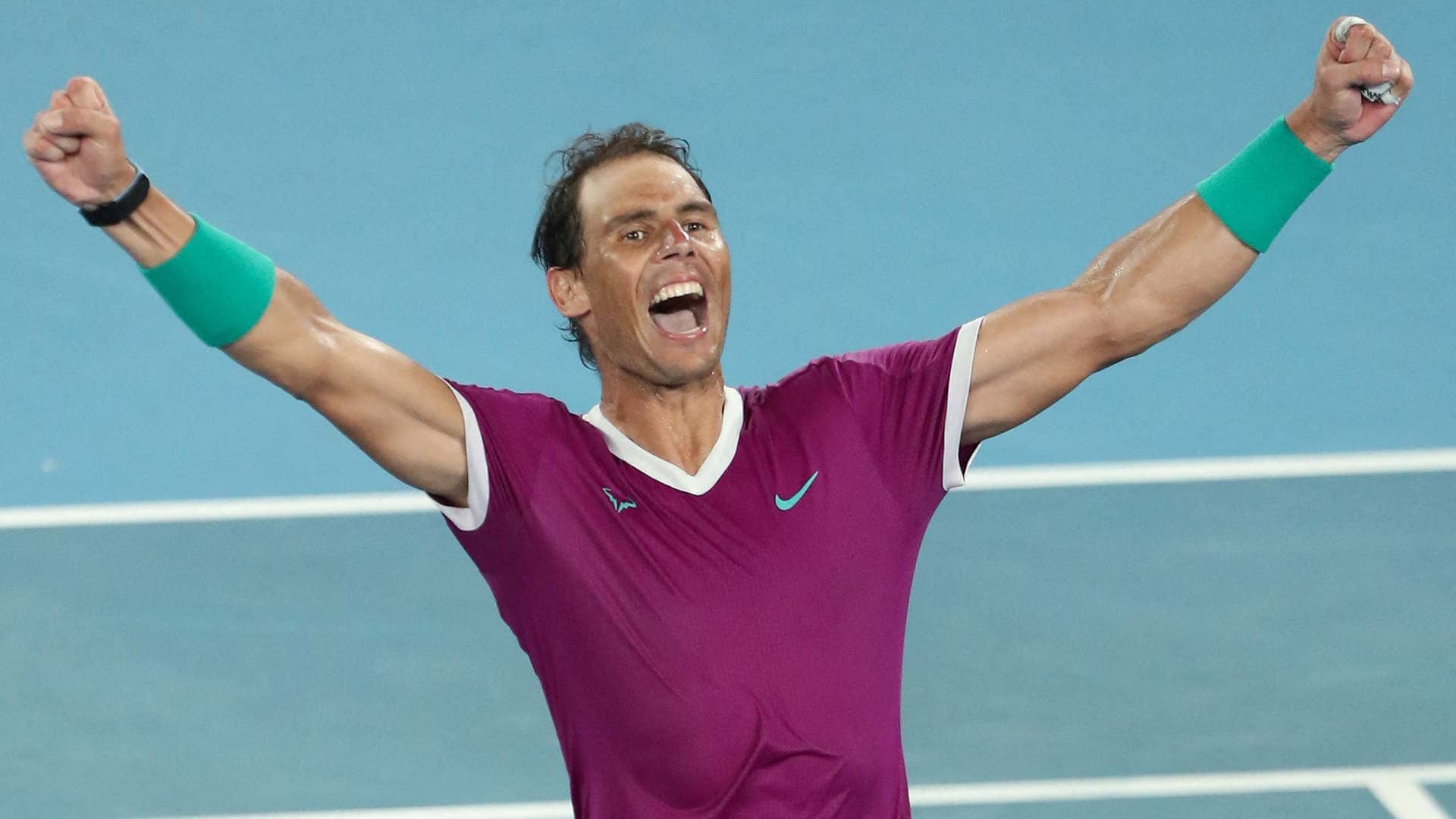 Nadal’s ability to stay the course was all the more remarkable considering his relatively recent return to the Tour after missing the second half of the 2021 season with a left-foot injury. Medvedev later admitted his disbelief at his 35-year-old’s physical prowess during the pair’s marathon battle.

“[It’s] tough to talk after five hours, 30 minutes and losing, but I want to congratulate Rafa because what he did today, I was amazed,” said the second seed. “I tried during the match just to play tennis, but after the match I asked him, ‘Are you tired?’, because it was insane.”

1. US Open, QF, Alcaraz d. Sinner 6-3, 6-7(7), 6-7(0), 7-5, 6-3
Two of the biggest young talents in the game battling it out until the early hours in New York City, September’s US Open quarter-final between Carlos Alcaraz and Jannik Sinner was one for the history books.

It was a demonstration of power, athleticism, skill and sheer mental resilience from two players who look set to be at the top of the game for years to come. In what may well be the first of many classic Grand Slam battles between the two, Alcaraz ultimately prevailed having saved match point at 4-5 in the fourth set en route to a remarkable five-hour, 15-minute win.

“"Honestly, I still don't know how I did it," said the Spaniard after sealing victory in the second-longest match in tournament history. "You have to believe in yourself. I believed in my game. It was really difficult to close out the match. I tried to stay calm, but it is difficult in the moment." 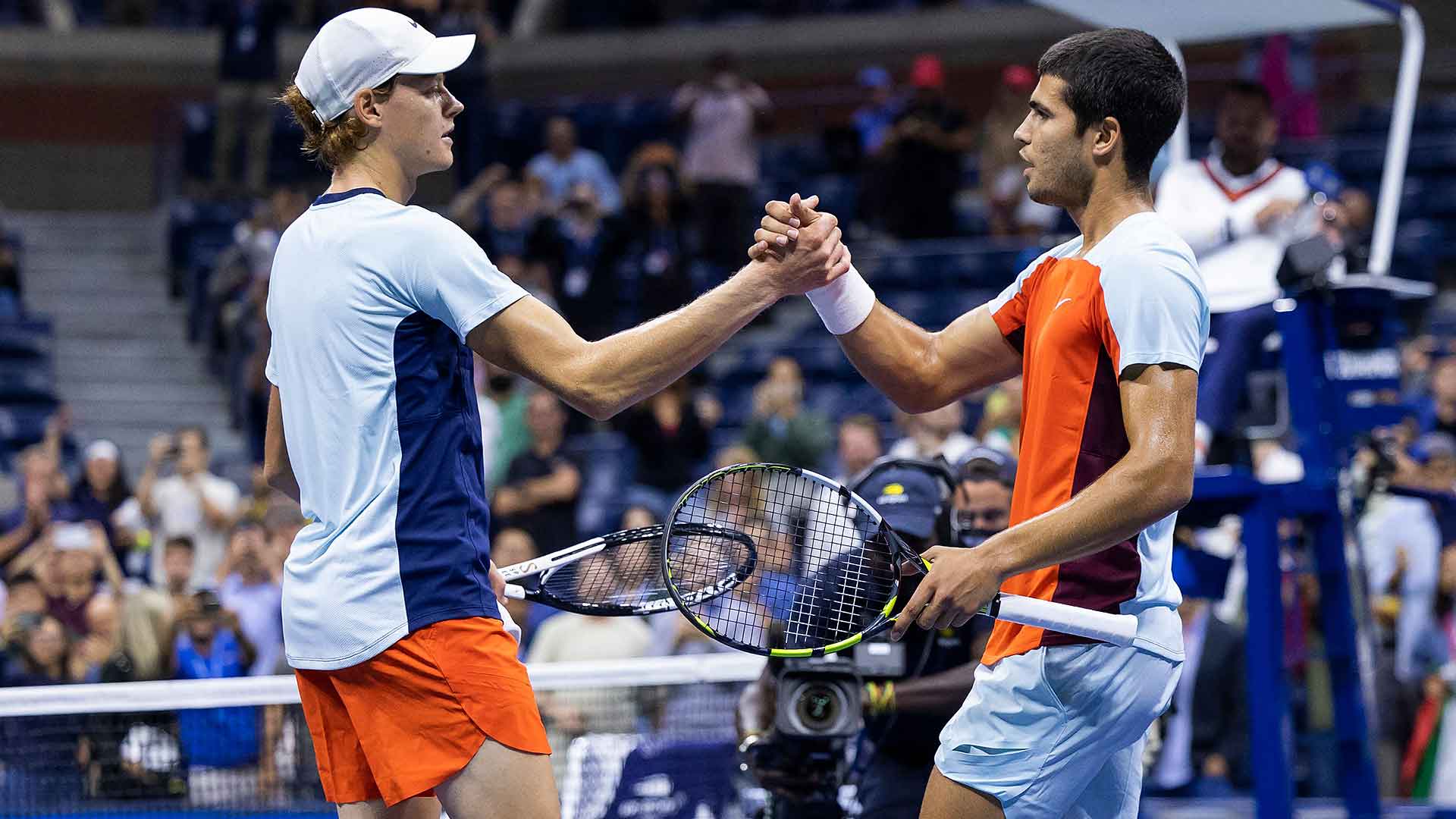 The 19-year-old Alcaraz and 20-year-old Sinner both hit the ball with relentless force throughout. The combination of power and consistency kept an enraptured Arthur Ashe Stadium crowd on the edge of their seats all the way through to 2:50 a.m., when Alcaraz finally clinched a New York classic that broke the record for the latest finish in tournament history.

“The energy I received in this court at 3 a.m., it was unbelievable,” Alcaraz later acknowledged. “I mean, probably in other tournaments, everybody [would go] to their house to rest. But they [stayed] in the court, supporting me. It was unbelievable.”

Djokovic To Make Biggest World No. 1 Jump In History