Down two sets to love and two match points, Andrew Whittington has produced his biggest comeback of the week at Roehampton to qualify for Wimbledon. 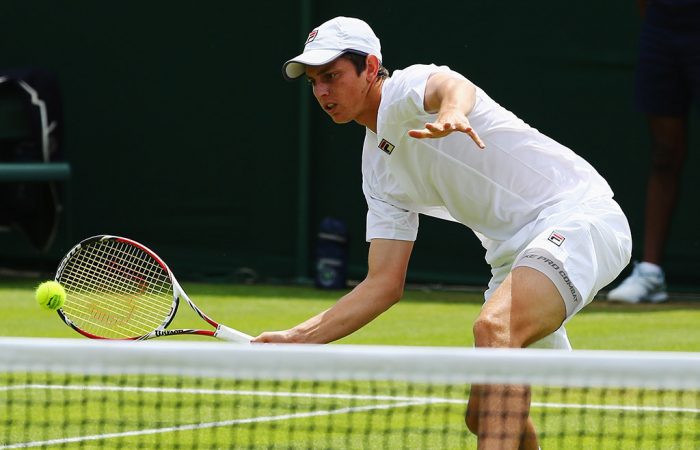 In the first round of Wimbledon qualifying, Andrew Whittington stared down a 1-4 third-set deficit against Stephane Robert before coming back to win.

In the second round, he dropped the first set to Tim Smyczek before coming through in a tense three-setter.

Yet in the final round of the qualifying event on Thursday, his run looked sure to come to an end when he trailed by two sets to love and faced two match points against Denis Kudla.

Whittington, however, would not fold.

The Victorian saved those match points and eventually ran away with a 4-6 2-6 7-6(7) 7-6(3) 6-0 win over the American to come through qualifying at a Grand Slam event for the first time in his career.

“It’s my first time and what a way to do it. I don’t think it’s going to sink in until I actually go on site,” said Whittington, the world No.209.

“Denis played two great sets. Even in the third set I just told myself, when I went for a toilet break, to just take care of my serve and I did that in the third set. And you never know – he might be feeling a bit nervous. It was a tight tiebreak and I took it and I think I started looking good and started playing a lot better and serving well.”

It completed a magnificent day for Australia at Roehampton; earlier on Thursday Destanee Aiava cruised to a 6-2 6-1 win over Barbora Krejickova before Arina Rodionova stunned former world No.15 Kaia Kanepi 2-6 6-2 7-5.

Aiava and Rodionova on Friday will play for a place in the main draw.

Aiava faces Marina Erakovic of New Zealand while Rodionova takes on 11th seed Tamara Korpatsch, who ended the run of another Aussie, Lizette Cabrera, 6-3 6-3 on Thursday.

Yet the day belonged to Whittington, who thrilled the large Aussie contingent on Court No.4 with a performance showcasing his strength, power, fitness, belief and will.

“I think it was in the fifth set (when I knew I had the momentum),” Whittington said.

“I guess when I broke him at 2-0 his head went down a fair bit and I broke him (again) and I felt pretty good. It was nice to finish that set as quick as I could.

“It’s tough – I think he was pretty down (after the match). It’s tough when you’ve had a couple of match points, but that’s tennis. It’s happened to me and it will keep happening no matter what. I’m just thrilled to get through and I can’t wait.

“I’ve played doubles at Wimbledon in 2014 but this might be a bit different this time in singles (smiling). I’m going to look forward to it and I’m going to soak it in as much as I can and just enjoy it.”

Another pair of Aussies, Monique Adamczak and Storm Sanders, qualified for the women’s doubles main draw with a 6-4 7-5 win over Australian Jess Moore and Japan’s Akiko Omae.

Adamczak and Sanders have enjoyed a stellar few weeks on tour, winning the ITF $100,000 event in Surbiton before triumphing at the WTA Nottingham tournament for the biggest title of their careers.

Yet there was heartbreak for John-Patrick Smith on Thursday, with the Queenslander falling in five epic sets to Christian Garin of Chile in the final round of qualifying.