Nick Kyrgios faces the prospect of another fourth-round meeting with top-ranked Andy Murray while Ash Barty has drawn No.4 seed Elina Svitolina in round one at Wimbledon. 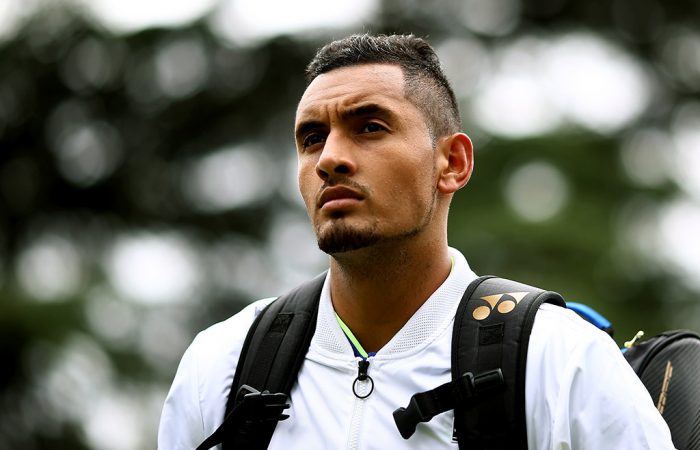 Nick Kyrgios may need to pull off tennis’s version of Mission: Impossible to win Wimbledon after being presented with an extraordinary draw at the All England Club.

Kyrgios will open his campaign against Pierre-Hugues Herbert and could potentially face a trio of Frenchman in the first week of the tournament, which starts on Monday.

Then the real trouble awaits.

Australia’s big hope may have to topple Grand Slam giants Andy Murray, the top-seeded titleholder, then Stan Wawrinka, Rafael Nadal and either Roger Federer or Novak Djokovic in successive matches to hoist the trophy.

Daria Gavrilova, enjoying seeded protection for the first time at the All England Club, faces a qualifier and has a great opportunity to venture to the second week, where her first major test is likely to come from No.16 Anastasia Pavlyuchenkova.

But Ash Barty’s grass-court form will be put to the test immediately in an opener against fourth seed Elina Svitolina.

Svitolina, who reached the Roland Garros quarters and who currently sits at No.2 in the WTA Race to Singapore, dealt with a foot injury during a second-round loss in Birmingham to Camila Giorgi and hasn’t played on grass since.

That same week in Birmingham, Barty advanced to the singles final and won the doubles title with Casey Dellacqua.

First, Kyrgios must see off Herbert, as he did in doubles at the French Open, then either Benoit Paire or Brazilian Rogerio Dutra Silva in the second round.

His first seeded test is expected to come in the third round against Lucas Pouille, the French 14th seed who ousted Bernard Tomic in 2016.

If he survives the first week for a fourth straight year, the sport’s heavyweights are likely to be lying in wait.

Murray beat Kyrgios in straight sets last year but both players are carrying hip complaints into the 2017 edition.

The Queenslander must take down 10-time French Open champion and fourth-seed Nadal to extend his stay beyond one match.

Tomic takes on 27th seed Mischa Zverev, fresh from beating the German this week at Eastbourne.

Jordan Thompson, who shocked the tennis world last week with his victory over Murray at the Queen’s Club, opens against 25th seed Albert Ramos Vinolas.

Thanasi Kokkinakis has a tough match against 29th seed and Juan Martin del Potro, while qualifier Andrew Whittington’s first-round opponent is to be determined.

The most exciting aspect of the men’s draw is the possibility of Federer and Nadal in another dream Grand Slam final.

Chasing a record eighth title, Federer is in the same half of the draw as Djokovic, with Nadal projected to meet Murray – or potentially Kyrgios – in another blockbuster semifinal.

How 'Outsider' Bollettieri Changed The Game