No.23 seed proves too strong for Slovakian Kristina Kucova to open her Roland Garros 2017 campaign in style. 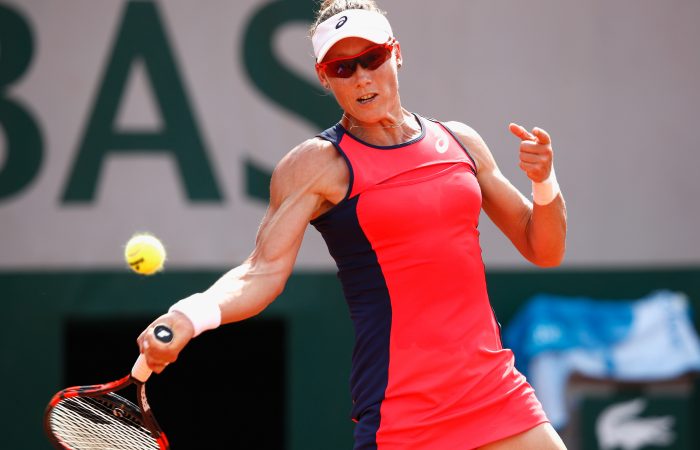 Sam Stosur is the first Australian player into the French Open second round, scoring a gritty first-round win over Kristina Kucova.

Sluggish early after a gruelling five-match run to the title in Strasbourg on Saturday, Stosur recovered from a service break down in the opening set to see off the Slovak 7-5 6-1 in one hour and 19 minutes.

“It wasn’t, obviously, the easiest necessarily preparation going into a Grand Slam,” Stosur said of her swift turnaround and one-day Paris build-up.

“But, on the other hand, winning a title and winning five matches in a row is awesome preparation.

“So I guess lucky that Strasbourg is pretty close and we all jumped on the same train together and got here as quickly as we could.

“But it was still definitely a very quick turnaround given the length and the toughness of the match I played against Dasha just on Saturday.

“But all in all, I’m really happy with the way I played today.”

Stosur next faces world no.87 Belgian Kirsten Flipkens – a 6-3 6-3 winner over Mandy Minella – for a place in the last 32, after advancing to the second round in Paris for the 11th consecutive year.

The former runner-up and four-time semifinalist broke Kucova five times and dropped serve twice, both in the opening set.

But after falling behind 5-4, Stosur showed great foot speed and hands to run down a drop shot and break back with a delightful backhand winner to stay in the set.

She eventually claimed the set on a Kucova error, reeling off five straight games to take a 3-0 lead in the second – and a stranglehold on the match.

If Stosur advances on Wednesday, the 23rd seed and former US Open champion could strike dual Wimbledon winner and the tournament’s sentimental favourite Petra Kvitova in round three.