Smiling Stosur ready for round two

Sam Stosur is ready for her second round clash with Belgian Kirsten Flipkens in Paris. 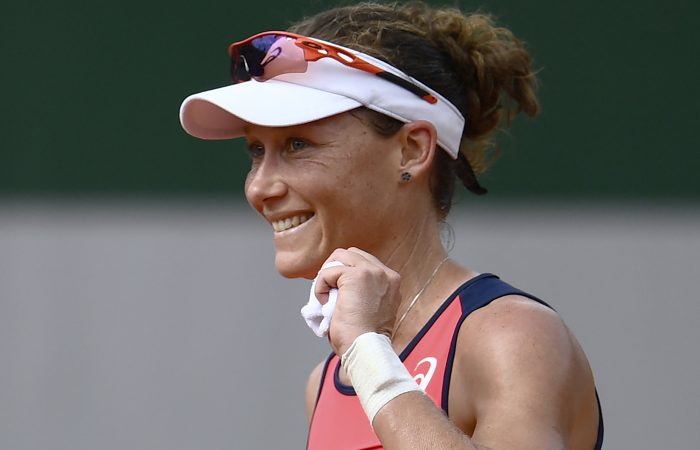 Riding a six-match winning streak into the French Open second round, there is no wonder Sam Stosur is smiling.

Stosur holds a 2-1 win-loss record against the No.87-ranked Flipkens, with her only loss on her least-preferred grass surface.

“It’s been a long time since I played against her,” Stosur admitted, with their most recent meeting in 2014.

Yet as a four-time French Open semifinalist, the No.23-seeded Stosur enters the match confident in her game.

“I think that’s a good position to be in. I’ve, obviously, had great results here in the past. It’s a surface that I enjoy playing on,” she said after a straight-sets win over Slovak Kristina Kucova in the first round on Monday.

Many Australian players feature on the day four schedule.

Three-time Grand Slam doubles finalists Casey Dellacqua and Ashleigh Barty will aim to use the momentum from their Strasbourg title win last week to reach the second round tonight. They begin their campaign against French wildcards Marine Partaud and Virginie Razzano.

Anastasia Rodionova and her Croatian partner Darija Jurak, the No.17 seeds, also play tonight. As do Daria Gavrilova and her Russian partner Anastasia Pavlyuchenkova, and Ajla Tomljanovic alongside Serbian Aleksandra Krunic.

The French Open is televised live on Fox Sports Australia, with coverage beginning from 7pm.