Thanks to the connective power of Twitter, Nick Kyrgios and an excited fan enjoyed a hit on the practice courts of the Coupe Rogers in Montreal. 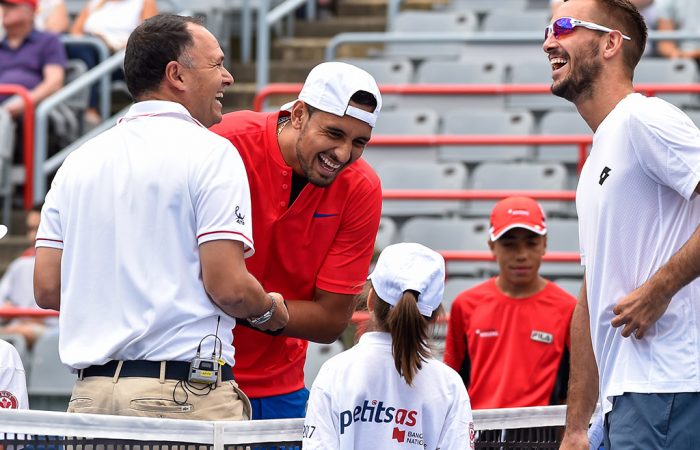 A Canadian teenager has enjoyed an incredible moment with Australian tennis star Nick Kyrgios at the Rogers Cup tournament in Montreal.

Matt Morin, 17, tweeted Kyrgios over the weekend to say he’d be coming to the tournament this week and had a special request.

“@NickKyrgios I’m at Rogers Cup on Tuesday, I know this is a long shot but could we hit for 5 minutes if you’re practicing? That’d be dope!,” Morin said.

Little over an hour later, Kyrgios replied: “Sure, hit me up when u there”.

“Also anyone at Rogers Cup throughout the week can come on my practice court and chill and hit if u (sic) want.”

The 22-year-old Aussie ended his injury-dogged four-match losing streak on Monday with a 6-1 6-2 win over Serbian Viktor Troicki.

And he stayed true to his word in Montreal, facing the young Canadian for two friendly hit-outs on Tuesday ahead of his second round clash with Italy’s Paolo Lorenzi on Wednesday.

Morin seemed blown away by his encounter with the world No.24, tweeting on Tuesday: “That moment when @NickKyrgios let’s you play twice with him on the practice court. good luck bro let’s get it!”.

Kyrgios was booed when he retired hurt at the Citi Open in Washington last week however he also spent time in a hit-out with fans, gifting a young boy a racquet when he successfully returned serve.