After winning the title in New Haven, Daria Gavrilova is determined to stay in the moment as she targets her first ever main-draw victory at the US Open. 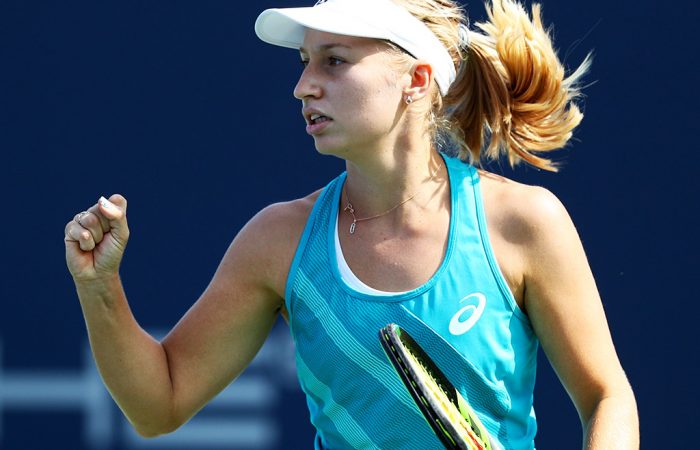 Daria Gavrilova is vowing to “stay in the moment” as she attempts to parlay her breakthrough tour win into a tilt at US Open glory.

The junior champion at Flushing Meadows in 2010 and a former under-18 world No.1, Gavrilova had to wait seven years before landing her maiden WTA trophy in New Haven on Sunday.

“I actually thought about it today and thought ‘crap’, that was a long time ago,” Australia’s top women’s hope told AAP.

“So many emotions. Yeah, it was a pretty special feeling.

“But I’m right now here at the US Open and I’ve come down for sure and I’ve already had a hit, so it’s a new start, new opportunity.”

The 23-year-old has arrived in New York riding high at a career-high No.20 in the world after taking down Grand Slam finalists Agnieszka Radwanska and Dominica Cibulkova, the top two seeds, to land the title in Connecticut.

But she’s made the mistake too many times before of placing undue pressure on herself to perform at the majors.

First-round exits at the French Open, after making the final in Strasbourg two days before, and at Wimbledon have Gavrilova on guard of a letdown.

“My form’s as good as my next match,” she said ahead of her first-round tussle with American qualifier Allie Kiick on Tuesday in New York.

“So it’s a new opportunity but I’ll definitely build on my win (on Sunday) and try and produce similar tennis or the same level of tennis as I did in New Haven.

“I have to stay in the moment and try and focus on the process and not so much the outcome.”

Kiick was a junior rival that Gavrilova believes could be dangerous despite her lowly ranking of No.643 in the world.

“She’s overcome a few injuries and is playing great tennis now and it’s not easy to play qualifiers,” said Gavrilova, the 25th seed as she chases her long overdue first main-draw win at Flushing Meadows.

“For her to qualify is a pretty cool achievement. I’ve definitely got to be on top of my game to be able to win. I’ve got to fight from the very first point.

“That’s what I did in New Haven and started pretty well in all my matches and showed my opponent I was in it to win it.”