A quarterfinal run at Birmingham sees Daria Gavrilova on the cusp of a top-20 breakthrough – providing us with good reason to look back on some Dasha moments to remember. 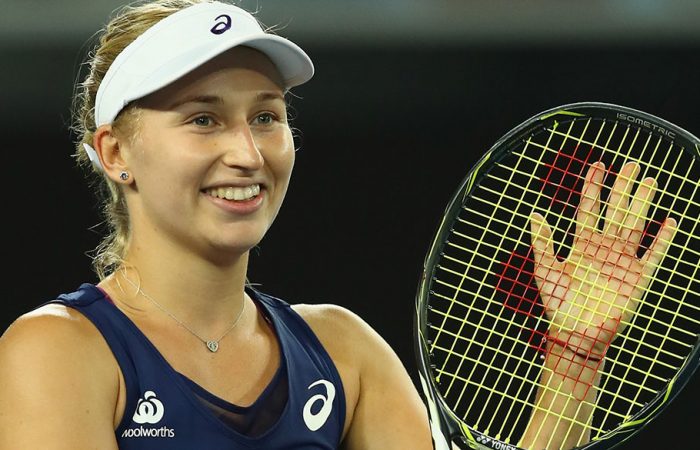 Hopman Cup heroics:  We saw the best of Dasha as she teamed with Nick Kyrgios to win the Hopman Cup for Australia in 2016. Gavrilova was at her most heroic when she saved a clutch match point in the doubles rubber with France to send Australia into the final.

And Dasha never stopped smiling: A favourite with fans and media throughout her debut at the team event, the bubbly Melburnian showed how the love was mutual when she joyfully (and hilariously) discussed that run to the final.

Fed Cup debut: Dasha quickly became a Fed Cup favourite when she debuted in the Australian team alongside Sam Stosur, Casey Dellacqua and Arina Rodionova at Brisbane in 2016. Gavrilova was a superstar in her most recent appearance against Serbia in  April’s World Group II Play-off, surrendering just seven games as she claimed important wins over Ivana Jorovic and Nina Stojanovic.

Ousting a Grand Slam champion: The popular local was fearless as she defeated No.6 seed and two-time Wimbledon champion Petra Kvitova at AO2016, with a straight-sets win sending her into a Grand Slam third round for the first time.

Another career-defining win: A third round win over Kristina Mladenovic was arguably even more career-defining, the spirited Dasha securing it 11-9 in the third set. “I’m just really excited … I want to hug the whole stadium,” Gavrilova memorably laughed later.

She handles the pressure: There was high expectation as Gavrilova returned to the Australian Open in 2017. But cheered on by her many local fans, Dasha claimed a trio of three-set wins to reach the second week for the second year running, including over higher-ranked Timea Bacsinszky.

Managing Maria: Not many young players can boast a win over Maria Sharapova but in 2015, the 21-year-old Gavrilova claimed a straight-sets upset of the former No.1 in their first-ever match in Miami.

She shows her feisty side: The stakes were high as Gavrilova returned to the Hopman Cup as defending champion for Australia. But Dasha showed how she was up for the challenge as she took on USA’s Jack Sock and CoCo Vandeweghe in mixed doubles.

A no.1 junior career: A runner-up to Kristina Mladenovic in the 2009 French Open girls’ event, Gavrilova became a Grand Slam champion when she defeated Yulia Putintseva to win the 2010 US Open girls’ title. She ended that year as the world No.1 junior player.

Her comeback: Gavrilova’s famous fighting spirit was critical in her biggest career setback. Late in 2013, she suffered a serious knee injury while competing in Asia and after undergoing a full knee reconstruction, dropped outside the world’s top 100. A successful comeback began with victory in the AO Wildcard Play-off, earning her entry into the 2015 tournament.