Barty marches on at US Open

Ash Barty reached the third round at a Grand Slam for the second time in 2017 after holding off Aliaksandra Sasnovich to reach the last 32 in New York. 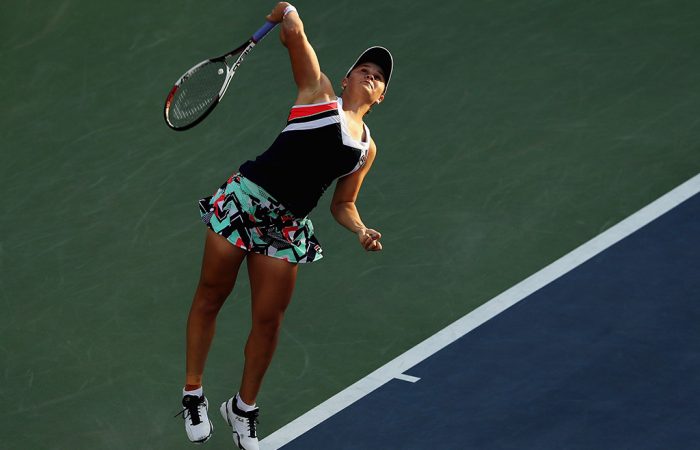 Ash Barty hopes to free-roll her way into the second week of a Grand Slam for the first time after continuing her breakthrough season with another milestone win in New York.

Australia’s resurgent former junior prodigy saw off Belarusian Aliaksandra Sasnovich 6-1 7-6(7) to progress to the third round of one of the most inviting US Open draws in years.

Already guaranteed a career-high ranking well inside the world’s top 40, Barty will play unseeded American Sloane Stephens – a former world No.11 and Grand Slam semifinalist – on Saturday with a golden opportunity to gatecrash the last 16.

Stephens ousted world No.10 Dominika Cibulkova to throw open Barty’s section of the draw, with the winner potentially facing another unseeded rival for a quarterfinal berth.

“Now it’s a bonus from here on in and I can go out and enjoy and play some really good tennis,” Barty said.

“I play pretty free anyway. I feel like I am in a situation where I can go out and try to play my best tennis and that is how I am going to win tennis matches.

“I feel like if I try to play the right way and still don’t come away with the win, I can hold my head up high and come away, no worries.”

Barty serves for the match at 5-4 in the second set but was broken for the first time, part of a run of three straight games for Sasnovich.

Yet the Queenslander steadied in the ensuing tiebreak, saving a set point at 5-6 and converting on her second match point to advance.

In January, Barty reached the third round at the Australian Open, then her best-ever Grand Slam result.

Back in tennis after a stint in professional cricket in the WBBL, Barty also teamed with Casey Dellacqua to make the French Open doubles decider to become the first all-Australian pairing in the professional era to contest the final of all four major tournaments.

The duo will launch their doubles title assault on Friday when Barty hopes to iron out a few chinks in her game before taking on Stephens in singles.

“There were times in my career, especially when I was younger, that doubles certainly helped my singles and I was playing on big courts and it was nice to have someone there to talk to like Case when I was feeling a bit stressed.

“We had a really open line of communication. It is nice to have those experiences under my belt so that when I do come out and play singles, it is a little more familiar.”

Unfortunately, Barty’s countrywomen Arina Rodionova and Ajla Tomljanovic were unable to join her at the next stage of the tournament.

Rodionova fell 7-5 6-3 to Greece’s Maria Sakkari while Ajla Tomljanovic went down 6-3 6-2 to Aleksandra Krunic, who a round earlier stunned No.7 seed Johanna Konta.