Ash Barty has advanced past the injured Camila Giorgi to reach her first grasscourt semifinal - and first at a WTA Premier tournament. 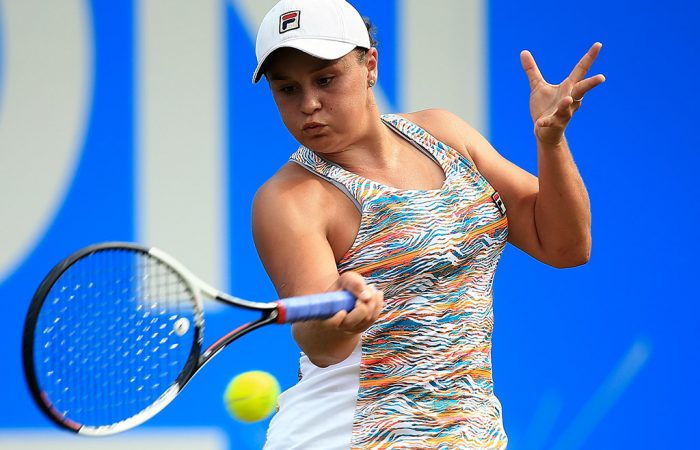 Ash Barty will line up against Garbine Muguruza in the semifinals of the Aegon Classic in Birmingham after opponent Camila Giorgi retired from their match on Friday.

Barty was controlling the match with a 5-2 lead when the Italian called for the trainer and then abruptly called it quits without attempting to play on.

The result sends Barty through to a last-four clash with the Spaniard, who also advanced via retirement when CoCo Vandeweghe withdrew from their quarterfinal early in the third set.

“Yeah I do remember (my last WTA semifinal) but this is my first Premier one, so that’s cool,” Barty told the on-court interviewer.

“You certainly don’t want to win a match like this … she’s played a lot of tennis this week, already won five matches (from qualifying).”

Barty’s last semifinal came in Kuala Lumpur earlier in 2017, a tournament she went on to win for her first WTA title.

The world No.77 also advances to her first semifinal on grass; her previous best results were quarterfinals in Nottingham the past two years.

Barty has already faced Muguruza once this week in Birmingham; along with Casey Dellacqua, the Aussie duo beat Muguruza and Dominika Cibulkova to reach the doubles semifinals.

Original link
Tweet
"I made a mistake and I must face up to it" Dan.....
Sam Groth: "When my team scores during a rain dela...