Barty and Dellacqua begin with a win

Ash Barty and Casey Dellacqua, one of the form doubles teams on grass coming into Wimbledon, began their campaign with a hard-fought first-round win. 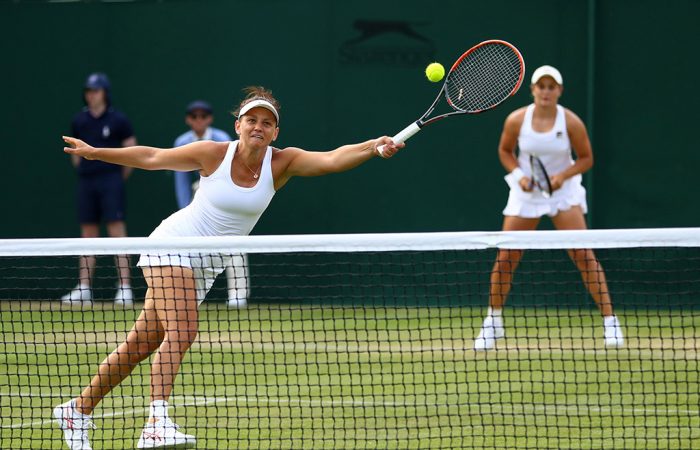 Ash Barty and Casey Dellacqua fought hard to subdue Jelena Jankovic and CoCo Vandeweghe in the first round of women’s doubles at Wimbledon on Thursday.

The Australian duo, seeded eighth, won 3-6 6-4 6-0 to take their place in the second round where they will face Chia-Jung Chuang and Misaki Doi.

“They started well and we just had to work our way through the match to get the result that we wanted,” Dellacqua told tennis.com.au.

“That’s way I like playing with Ash, because I can talk to her and I feel like I communicate with her and I know she does the same, so whatever the situation is, whether it’s a first round or a final, we can work our way through that.”

Added Barty: “I think in the first set, they both served great and put us on the back foot and we weren’t able to get into too many service games. But I think even the second, when it was close, we became more active and came in, and that’s what we do best, when we come into the net and use the volleys and the way we move around at the net together.

“I think that was probably the biggest difference – as soon as we could get in, it made a massive difference.”

Barty and Dellacqua, who together reached the Wimbledon doubles final in 2013, are again firming for another strong run at the All England Club.

After progressing to their fourth Grand Slam doubles final together at Roland Garros a month ago, the Aussies subsequently progressed to grasscourt finals in Birmingham and Eastbourne, lifting the trophy at the former.

“I think we should feel pretty confident in our game style that we can beat any team that we face,” Dellacqua said.

“We love the grass, so I think coming in having made a final and won a title gives us a lot of confidence and we just have to work our way through each match and take each one as it comes. That’s the first one ticked off, and work towards the next one.”

Two other Aussies also scored wins in doubles in the first round of tandem action on Thursday.

John Peers, who along with Henri Kontinen is the No.1 seed in men’s doubles, came away with a 2-6 6-2 7-5 6-1 victory over Italians Fabio Fognini and Andreas Seppi.

With Thanasi Kokkinakis and Jordan Thompson, Monique Adamczak and Storm Sanders, and Matt Reid and John-Patrick Smith all scoring first-round wins in doubles on Wednesday, the results went some way to erasing the disappointment of Australia’s singles campaign, where eight of nine Aussies fell in the first round.

“Obviously it’s not the results that we wanted in singles from both the men’s and women’s side, but I think it shows the depth that we have that we do still have so many teams left in the doubles and that we really value doubles and put a big effort in,” Barty said.

“Other teams have had some good wins yesterday as well. All Aussies love being at Wimbledon. We love being in a Slam and we all want to be in a Slam as long as we can, no matter what event it is.”

Original link
Tweet
Tags:
tennis
Are you watching? Tune in now for Day 4 Wimbledon ...
Tough day for John Isner vs....