Alicia Molik, Todd Woodbridge and Nicole Pratt spoke with tennis.com.au ahead of Wimbledon about Nick Kyrgios and Ash Barty, perhaps our two most natural grasscourt talents. 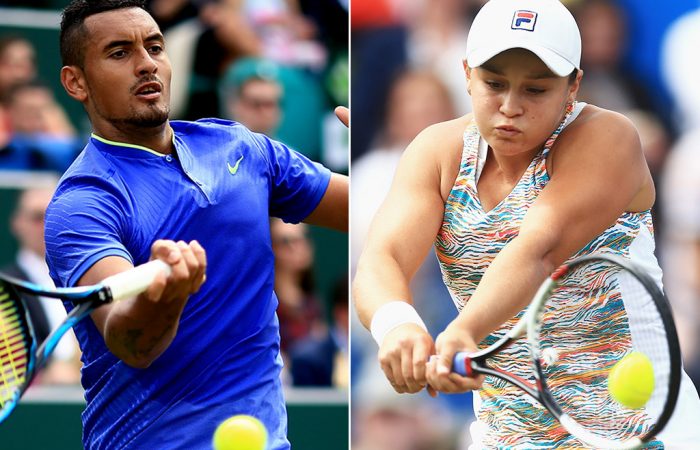 When Nick Kyrgios and Ash Barty play back-to-back on No.3 Court on Monday at Wimbledon, Aussie tennis fans are seeing arguably the nation’s two most promising grasscourt talents in action.

Six years ago at the All England Club, a 15-year-old Barty stormed to the girls’ singles title and in 2013 reached the women’s doubles final with Casey Dellacqua. That same year, Kyrgios hoisted the boys’ doubles title with Thanasi Kokkinakis – having done so with Andrew Harris at the same event 12 months earlier – and in 2014 announced himself as a superstar with a stunning Centre Court defeat of world No.1 Rafael Nadal en route to the men’s singles quarterfinals.

At 22 and 21 respectively, Kyrgios and Barty are among the world’s brightest young talents and stand to make an impact at Wimbledon, where the grass rewards their weapons and style and boosts their confidence.

We spoke to three Aussie greats about how they think this Aussie duo might fare at the 2017 Championships.

Todd Woodbridge: “If he has a niggle, that tends to go to the mental side of the game – and that can be worrying. If he is physically feeling alright, we’ll see him play well because he should be fairly fresh as he hasn’t played a ton of matches. For him it’s all about being fresh and enjoying being out there like we saw through March, April time. When you look at his draw, he’s got a good opener. Herbert will push him a little bit but he doesn’t have the firepower to be able to hurt Nick, I don’t think, on any surface so I think over a five-setter that’s a good opening match. And then he comes up against potentially Benoit Paire. They’ve had a battle before at the Australian open but Nick’s a different player to then, as is Benoit – he hasn’t gone forward, whereas Nick has. I think there’s the potential to be able to settle into the tournament and that’s a big thing for him, f he can get himself in where he feels comfortable. And the draw’s worked OK for that.”

Alicia Molik: “I though first of all (the grasscourt season) was fantastic for Ash. I felt like her confidence grew match by match, and you could see how well she’s able to take opponents apart because of her variety. She plays a game I think that so many women don’t face very often … especially when she uses her fantastic slice backhand. A lot of the women too struggle with the weight she gets behind her forehand. Her results were so deserved, and I know how excited Ash gets this time of year too when grass comes up – she normally starts talking about the grasscourt season in February (laughter). You can’t go past wins – Ash has so many runs on the board the last few weeks. And confidence. You can’t buy it, and you only get that from performing in critical situations and on big points. Ash has proved that.”

Nicole Pratt: “Ash will have to wait and see how the draw unfolds. But no matter the player on the other side of the net, they will certainly know Ash is a dangerous opponent. I would obviously love her to go deep in the draw, but she will only be looking at it through the lens of one match at a time. Ash has the ability to do some damage at SW19; she moves well on the grass, has tremendous variety in her game, and adapts so well to any challenge opponents throw at her. I believe Ash is one of the best servers on tour when targeting and consistent, and she showed this in Birmingham with a high winning percentage both on first and second serves.”

Sanders and Barty beaten in doubles quarterfinals at Olympic Games