Ashleigh Barty: By the numbers

A career-best win in Birmingham is one of many things to celebrate about this rising Australian star. 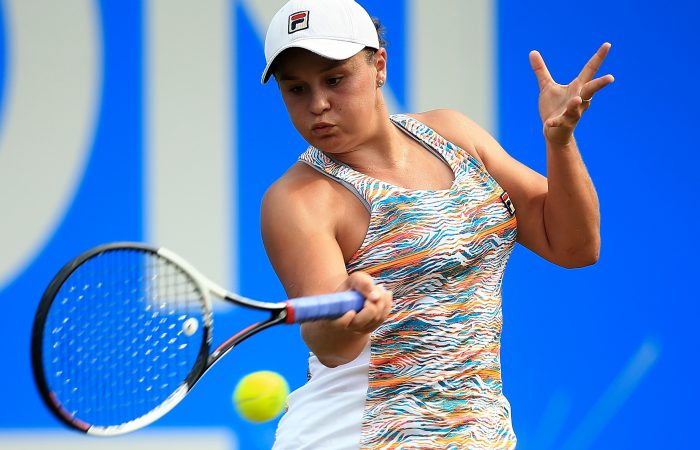 Ashleigh Barty has just scored the biggest win of her singles career, defeating world No.22 Barbora Strycova to reach the Birmingham quarterfinals.

But that’s just one of many numbers worth celebrating about this talented Australian player.

1: Ashleigh won her first WTA singles title in Kuala Lumpur in March, winning the title as a No.158-ranked qualifier.

3: Barty’s win over Strycova was the third top 50 win of her young career. Her previous best win was against then world No.33 Daniela Hantuchova at the Brisbane International four years ago.

4: Alongside Casey Dellacqua, Barty has won four WTA doubles titles and made all four Grand Slam finals. They reached the Australian Open, Wimbledon and US Open deciders in 2013 and after reuniting this year, they made the French Open final. Yet to win a Grand Slam title, they are aiming for a breakthough soon. “We bloody hope so,” she says. “Hopefully a Slam’s just around the corner.”

5: This is the fifth WTA-level singles quarterfinal she has made in the ‘2.0’ stage of her career.

6: It has been six years since Barty first shot to prominence after winning the Wimbledon girls’ singles title in 2011.

8: Barty has played eight rubbers for the Australian Fed Cup team and boasts a 6-2 win-loss record.

9: The playing number of Richmond captain Trent Cotchin in the AFL, a good friend of Barty who was supporting her during her career-best run to the third round at Australian Open 2017.

15: She was 15 years-old when she made her Grand Slam main draw debut, winning the AO Wildcard Play-off to enter the 2012 Australian Open.

21: Remarkably Ashleigh is still only 21, celebrating the milestone birthday in April.

24: The number of WTA-level main draw matches Barty has now won in her career. Six of these are on grass. “I’ve always loved playing on grass,” she says. “It’s just a shame we don’t get to play on it quite as much as I would like.”

34: In the WTA Race to Singapore, based on singles points earnt in 2017, Barty’s live position is No.34. This is ahead of high-profile players such as Agnieszka Radwanska and Genie Bouchard.

39: Barty’s top-score in the Women’s Big Bash League, where she played for Brisbane Heat during a 20-month break from tennis in 2015-16.

70: Her victory against Strycova is projected to propel her ranking into the world’s top 70 for the first time, bettering her career-best of No.76 set last month. Should she win the Birmingham title, her ranking would be verging on the world’s top 40.

17.9K: The number of Twitter followers the popular Barty has, many of which are Australians. “It’s always nice having Aussie fans,” she says.